The US Dollar appears to be making a move against its European counterpart. Looking at the chart below, EUR/USD has recently pushed below a near-term rising trend line from the beginning of this year. Is the pair getting ready to make a pronounced move to the downside? Perhaps, there are warning signs. Even so, there are some obstacles that may hinder its progress.

For starters, the long-term rising trend line from April 2017 is standing in the way as immediate support. A break below it could mean a major reversal from EUR/USD’s uptrend in 2017. In such a scenario, that exposes the January 17th low at 1.2162. Prices were unable to close below it on March 1st. Coincidentally, this level closely aligns with the 38.2% Fibonacci retracement which could make for a persistent area of support.

On the other hand, EUR/USD could try to push higher. It seems to have formed an area of resistance just below 1.2334 over the past few trading day. A push above that expose the early March highs around 1.2448. Should the pair keep climbing after that, it will inevitably face the falling trend line from all the way back to July 2008. 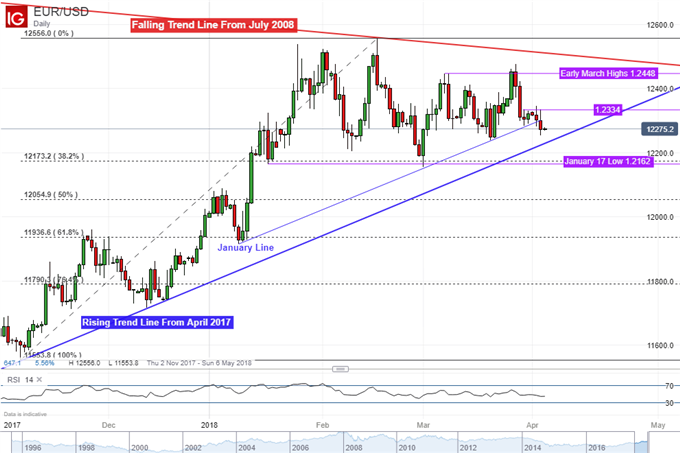 Looking at a weekly chart below, we can get a better glimpse of the two converging long-term trend lines. The reason why EUR/USD may be at risk of turning lower is that negative RSI divergence accompanied the pair’s ascent from early September 2017. This hints that momentum to the upside is ebbing. We will see if the 2017 line can keep supporting the pair. If a breakout occurs, confirmation would improve the argument for a more pronounced reversal. 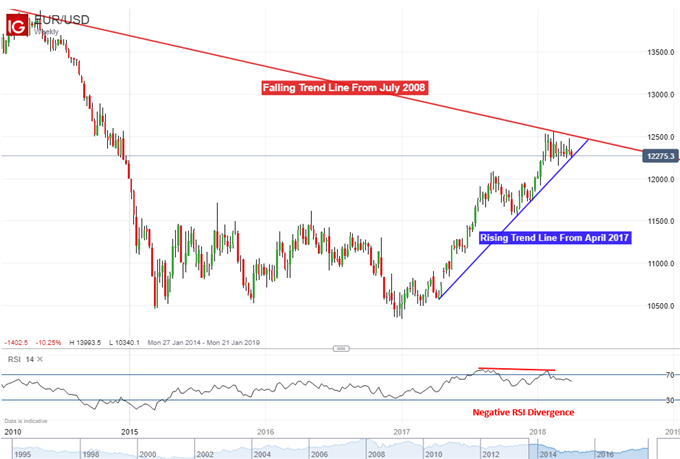